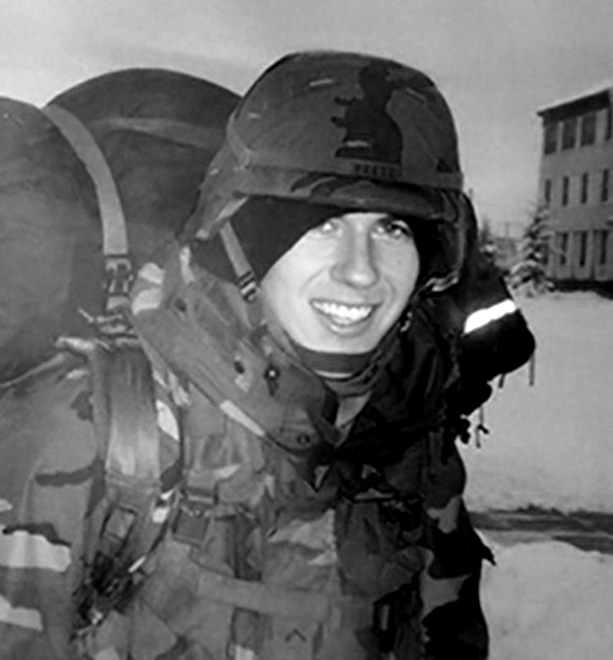 Ryan has always known that at some point in his life he would join the military, most likely the Army, because he wanted to do a job that was tough and dangerous. His Dad served in the Navy. Ryan is the youngest of six children and saw all his brothers and sisters go into either the Air Force or the Army. After he got out of high school in Mechanicsville, Virginia, his parents moved to Tulsa, Oklahoma where Ryan worked as a waiter and attended community college. At the end of 2002, he decided it was time to join and serve his country in the Army as a Cavalry Scout.

Ryan was sent to basic training and AIT at Fort Knox, Kentucky in April 2003 to September 2003. He received orders to Bravo Troop 2nd Plt 4/14 Cav 172nd SBCT Fort Wainwright in Fairbanks, Alaska. His unit was the first Stryker (8 wheeled, armored fighting vehicle) Brigade Combat Team in Alaska. Ryan was proud to be the driver of his Lieutenant’s vehicle. He learned everything about that vehicle from driving it through rough outback terrain to the many recovery techniques. He spent time in Fort Bliss,Texas, getting acclimated to how the vehicle worked in a sandy hotter climate and received more training in combat maneuvers. Ryan also went to Fort Polk, Louisiana for training before deploying to Iraq.

In August, 2005, Ryan’s unit left Alaska and went to Iraq. For the first few months they were in Rawah, Iraq, providing security for the Iraqi’s while they had elections in their hostile town. The sounds of IED’s going off and mortar rounds was something they heard daily. There was a day when Ryan was on the phone with his mom and a mortar round exploded very close to the plywood shack he was in and a fuel truck.

While his unit was on patrol through the towns or through the desert, they were always on the look out for IED’s buried in the sand or vehicles that were wired to blow them up. They would set up checkpoints and search people and their vehicles for explosives and weapons to keep the area safe. At one point, they established a small post further out in the desert, close to Syria, to prevent anyone with weapons from crossing the border. One night, they detained 4 Iraqi civilians who had been seen with 8 other people with AK’s and RPG’s. Other days they would drive to small towns to find out what was happening, who was in charge of the town and what services, if any, were available. They would search the area and often find caches of weapons and explosives.

At the end of his 12 months in Iraq, he was excited about coming home and out of what he considered hell, only to find out that his unit was being extended, and they were headed to Baghdad. He was in Baghdad for about 4 months, and it was pretty rough. While providing security through one town in their Strykers, an IED went off right next to the vehicle Ryan was in. He was the Platoon Sergeant’s security at this point, and he was standing in the back hatch when it went off. The force of it knocked Ryan to the floor. The next day an IED went off next to the Stryker right behind him, this time it killed his medic. “We lost a lot of guys because of IED’s and sniper fire. All of them I think about daily.” In November, 2006, Ryan flew back home to Alaska. From there he was shipped back to Oklahoma where he completed his tour in April, 2007. RYAN FOOTE, THANK YOU FOR YOUR SERVICE AND WELCOME HOME!